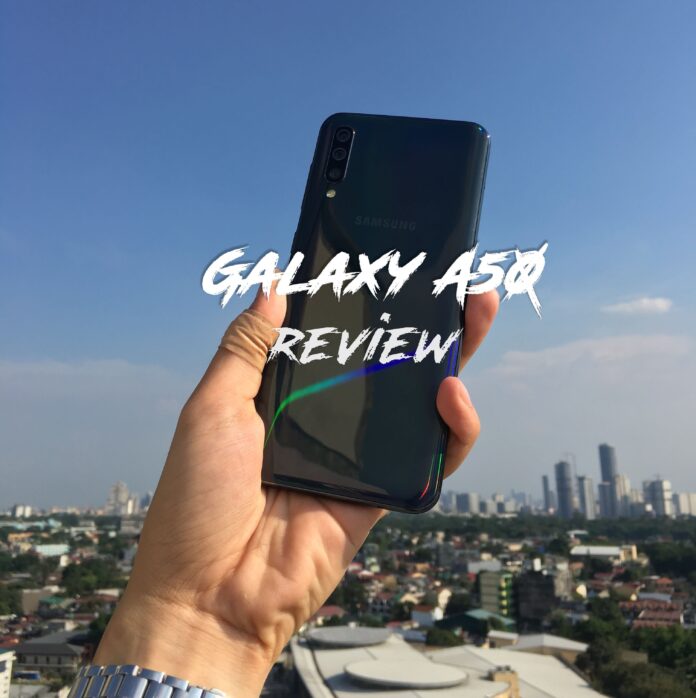 Samsung has managed to completely revamp its budget strategy, and the result of that is its new Galaxy A series. The new Galaxy A50 is a paradigm of a great budget phone that Samsung has to offer. It has an overall great design with a gradient pattern at the back which is made of what they call ‘glass-tic’ bodies, in-display fingerprint sensor and three cameras at the back.

Galaxy A50 is an impressive 6.4-inch smartphone with a new design that Samsung calls Infinity-U Display. Samsung’s new term for the small, drop-shaped notch at the top of their AMOLED display, a notch similar to the one found on Xiaomi Mi 9 for example. The cover at the back looks like glass but technically, it is a plastic with a glossy appeal that makes it appear like glass. It has a gradient finish that creates a rainbow effect as light bounces off its surface. It retained a 3.5mm jack at the bottom (what’s headphone jack?). Power and volume buttons are located on the right side of the device and sim tray can be found on the left side. You won’t find a fingerprint sensor at the back. We know that you already know where it is.. BUT if not, guess what. Galaxy A50 has an in-display fingerprint sensor, but it is not as fast as a standard capacitive fingerprint reader though. The display is pretty excellent even in daylight situations. With its AMOLED Full HD+ ( 1080 x 2340 pixels )display, it is a perfect smartphone for that Game of Thrones marathon!

This phone comes with a triple rear camera setup that includes: a 25-megapixel main camera with an f/1.7 aperture accompanied by a 5-megapixel f/2.2 depth sensor camera to support Live Focus portraits on subjects, and an 8 megapixel f/2.2 ultra-wide angle lens with a 123-degree fov. The rear camera takes good photos in a broad daylight scene however we find it a bit washed out in low-light scenes. The front camera of A50 is equipped with a 25-megapixel f/2.0 selfie camera which took images just like the rear camera. It took images pretty well in broad daylight but also suffers from low-light situations.

It is powered by Exynos 9610 (10nm) which is Samsung’s most powerful chip for mid-range phones yet. It has 4 Cortex-A73 clocked at 2.3GHz for heavy tasks and 4 Cortex-A53 clocked at 1.7 GHz for the efficiency of the device along with Mali-G72 MP3 GPU and 6gb of RAM (The variant that we’ve received is 128gb internal storage with 6gb ram variant but it is also available in 64gb internal storage with 4gb ram). During our weeks of testing, you’ll notice hiccups while playing some heavy title games: Real Racing 3, PUBG and Mobile Legends. Sadly, it also doesn’t support high frame rate for Mobile Legends. We can tell that if you’re considering this device for gaming, you might want to expand your choices.

Samsung A50 has a 4,000mAh battery and also supports fast charging of 15W. During our weeks of testing, we noticed that on day-to-day usage, A50 does an excellent job at letting you get through a full day of normal use.

Samsung One UI and other features

The New Samsung Galaxy A series is Samsung’s first non-flagship device that comes with Android Pie together with Samsung’s One UI skin out of the box. It is the same One UI version that can be found on the Galaxy S10.

Other features on A50 includes Night mode, Always on Display, Dual Messenger, Game Launcher, Secure Folder, One-Handed mode, Blue light filter, and an option to change your navigation bar gestures. You also get gesture options such as Lift to wake and Double tap to wake.

Samsung Galaxy A50 is available right now to buy at PHP 17,990 with your color choice in Blue, Black, or White. You can buy this device at Samsung Experience stores, authorized dealers, and online shops.