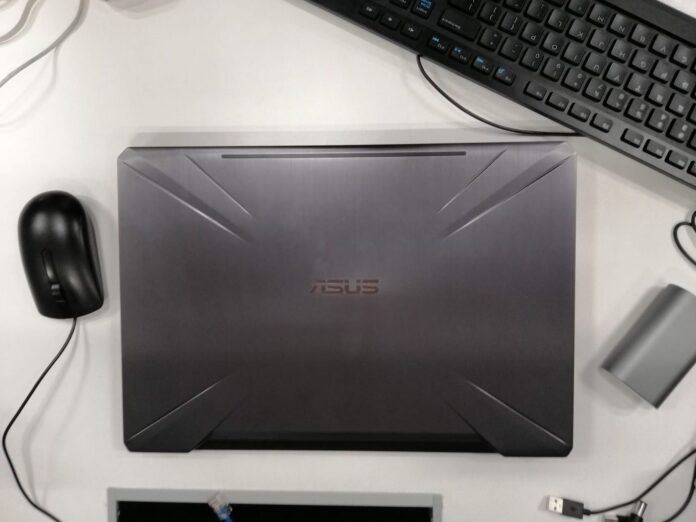 Wayback around 2009, TUF was already with ASUS’ branding as it tops the motherboard category, it means “The Ultimate Force” having stability, reliability and durability in mind that was meant for heavy usage.

Now, we’ll be looking at the first-ever notebook to take the TUF branding: ASUS TUF FX504. Just next to ASUS Republic of Gamers (ROG) Scar and Hero edition gaming notebooks, TUF FX504 was purposed for the entry-level gaming. Is this your new gaming/work notebook to start with? Let’s find out in our review.

The ASUS TUF FX504 takes on the hints of its PC counterparts. It possesses a brushed metallic silver finish in its overall appearance resembling to a steel bar giving you a sturdy impression of it. As heavy as it may look, the overall build was actually made in plastic that weighs in at only 2.3KG. It comes 4 different design options: Black Matter, Red Matter, Fusion, and this Premium Steel.

Overall, it looks clean and assertive just enough to know that it has toughness in it and giving an impression that it will last longer. Although, having this simple look in its outer side may not catch attention all the time.

Watch below one of the main features of this gaming laptop

The FX504’s keyboard sports an uncluttered design favorable to the gamers, like the inward air flow of fan located below the highlighted WASD key group. This was intended to keep ventilation flowing to your hand under long gaming sessions. Moreover, this keyboard is reported as desktop-inspired for extended gaming and typing usage that bears up to a lifespan of 20-million key presses.

Trackpad on the other hand, isn’t the best one out there but not to rank in the lowest. It is placed on the left side of the center that is often found on 15-inches, looking in consideration the number-pad in place at the right side. This might be a minor problem to those who are not used to have their trackpads on the left rather at the center. Aside from that, I can’t help but notice from time to time, smudges and fingerprints are always present at the trackpad and even occurring almost anywhere in its body that you touched.

The main function of the FX504 TUF is not about its durability but in its capability to play your demanding games. ASUS assembled the laptop with an i5-8300H processor, Nvidia GTX 1050 GPU, and 8GB DDR4 of RAM. This is not the least specs configuration among the series, while the one with the most specs is having an i7-8750H processor, 8GB RAM, and 17.3FHD screen among others.

What they did on the Processor and GPU combo was not the bad at all but having only 4GB of RAM is not enough to get along with your games and multiple programs combo. Good thing they have a configuration that has 8GB of RAM already, this enabled me to open multiple programs at the same time with heavy internet browsing composed of multiple tabs, and while playing games alternately.

ASUS equips the TUF FX504 with a matte 15.6 inch screen and TN 120Hz anti-glare panel making it a winner at some point and lose on another.

We know that the TN panels are relatively poor in terms of viewing angles as compared with IPS screen panels, surprisingly this one is adequate having only color shifting and contrast noticeable from lower and upper angles. Watching the screen from the center and the sides you won’t be noticing much difference. In addition, I find the screen having rich in contrast and bright screen.

Even in its size of a 15.6-inch laptop, the FX504 is quite short on ports. It has only two USB 3.1 Gen 1 Type-A ports, a USB 2.0 Type-A, an audio jack, HDMI 1.4, standard RJ45 ethernet port, and the charging port all arranged at the left side to give space for the right hand side mouse area setup and leaving it only with the Kensington Lock at the top edge.

Wishing that it has a built-in SD Card reader and a Type-C port on the right side but ASUS just did this to eliminate the fuss in the first place. Well, you could always buy a better external ports that you need.

ASUS FX504 comes with Windows 10 Home and pre-installed apps which was developed by ASUS for their products and a few necessary Microsoft programs.

We can’t expect much on this part of the laptop, we recommend that you’re beside an electric socket to charge every now and then or leave it connected.

It lasted for about 3 and a half hours of day-to-day common multitasking activities and 5-6 hours of Youtube streaming this is under screen’s brightness at about 40% (roughly 130 nits).

The laptop comes with a standard 120 Wh power charger and a full charge takes around an hour and 30 minutes up to 2 hours.